Presented by Balcones Heights Jazz Festival at Amphitheater at Wonderland of the Americas, San Antonio TX 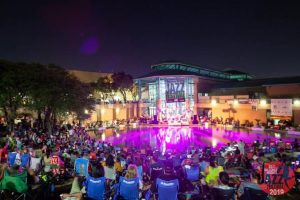 The 27th Annual Balcones Heights Jazz Festival is proud to announce the addition of a simmering summer jazz concert on July 16 from 7:30 p.m.-10:30 p.m. to its year-long concert series.

This summer’s free concert will feature San Antonio’s Joe Posada Trio, who will open-up the show, with national headliners Nils and Johnny Britt performing at the Wonderland of the Americas Amphitheatre in Balcones Heights.

This summer’s free concert will feature San Antonio’s Joe Posada Trio, who will open-up the show, with national headliners Nils and Johnny Britt performing at the Wonderland of the Americas Amphitheatre in Balcones Heights.

General admission is free for outdoor seating at Wonderland of the Americas Amphitheatre, 4522 Fredericksburg Rd. in Balcones Heights, Texas, and is first-come, first-serve. Food trucks will be available; portable coolers are not allowed.

Latin Grammy award winner Joe Posada, a native of San Antonio is one of Tejano music's most celebrated recording artists and celebrated saxophonists. He will perform from 7:30 p.m.-8:30 p.m. and is also recognized as a timeless vocalist, an accomplished composer and a well-versed lyricist. His group, the Joe Posada Trio is renowned for their ability to energize, inspire, and “dazzle” a wide range of music lovers with fused sounds of jazz and Tejano.

For over a decade guitar virtuoso Nils has been one of the most successful forces in the contemporary jazz genre. He has been mesmerizing audiences with his sound, producing hit after hit, with six #1 Billboard hits including “Pacific Coast Highway,” the most played song on smooth jazz radio since 2000. “His CD ‘Jazz Gems – The Best of Nils’” has been hailed as “The Best of Contemporary Jazz” for its masterfully composed and produced hits. As songwriter and producer, he used his “Midas touch” to provide hits for many artists in this genre, including Lisa Addeo, George Benson, Brian Simpson, Reza Khan, Alvin Pope and Tony Saunders to name a few.

Johnny Britt is a multi-talented singer, songwriter, producer, trumpeter, arranger, and composer. Founder of the Motown MoJazz group Impromp2, Britt is now a soloist and has released his 4th solo album titled “Mo Jazzin'”. Britt has penned three number one Billboard hits with Boney James -- “Contact,” “The Total Experience” and “Grand Central” featuring George Duke. Now Boney has returned the favor to Britt with his single “You Sure Love To Ball'' featuring Boney James.​

The youngest ever musical director for the super group The Temptations, Britt was discovered by the legendary founder of The Temptations, Otis Williams. This led Britt to become the co-music producer along with Dan Carlin for the Emmy award-winning “Temptations” miniseries movie. Britt was also featured as a solo trumpet player in the Oscar-nominated movie “La La Land”. Britt worked with renowned composer Hans Zimmer as the featured trumpet soloist in the Oscar Nominated Motion Picture “Hidden Figures” and “Dunkirk”.

Since 1994, the Balcones Heights Jazz Festival has captivated jazz aficionados from in and around Texas with a free stellar line-up in the festival’s laid back and family-friendly atmosphere. Regulars or “jazz babies” grab their favorite spots along the edge of the sparkling reflecting pool and fountains of the city’s main hub, Wonderland of the Americas.

David Muñoz, host on iHeart Radio’s “Smooth Jazz San Antonio” will emcee the year-long festival. He’s hosted the Jazz Festival every year since the festival’s inception. Muñoz can now be heard talking about jazz and upcoming shows on the iHeart Radio app and on 101.9 FM in HD. 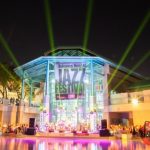 Amphitheater at Wonderland of the Americas 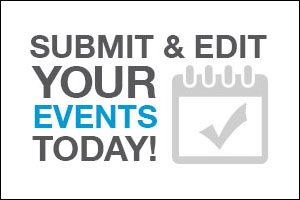