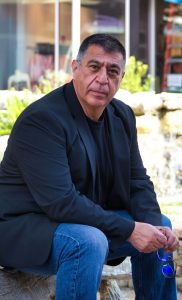 Born in México and based in San Antonio, Texas, Film, TV, and Stage Composer Federico Chávez-Blanco began scoring movies of the week and series for Televisa and Azteca Networks, accounting for more than 2,400 chapters broadcasted through NBC, Univision, BBC, Telemundo, and PBS, and numerous Film Festivals worldwide. His Mariachi Musical Cenicienta, a Quinceañera with a Taste of Cinderella" pays Homage to Hispanic Family tradition. A recent commission, "La Aurora",” was featured at the Nordic Museum, in Seattle, WA., and performed by Orquesta Northwest. Federico's was commissioned by the City of San Antonio to compose music used during the 2018 yearlong festivities for the SA300 San Antonio Tricentennial Celebration, including music that is part of the Witte Mayor 300 Witte Museum's permanent collection and a Chamber work celebrating our Military City. Another commission, "Cosmovision" a contemporary Ballet suite is inspired by the Aztec culture, a blend of pre-Hispanic and contemporary folk instrumentation with Nahua readings and Electronica, premiered at a VIP event for the Americans for the Arts (AFTA) convention during June 2012. He has won West Hollywood Film Fest’s Best Composer award and was a member and panelist/adjudicator for NALAC, NALIP. In 2015, he composed the music for Mexico City’s Film Commission promos presented during Cannes Film Festival. He mentors filmmakers and musicians at the yearly NALIP Latino Producers Academy in Santa Fe, New Mexico. His work reflects is the mix of his Mexican roots and cinematic elements acquired through the years.