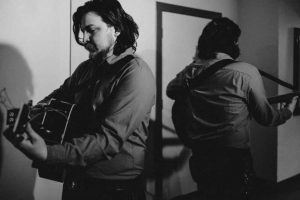 Michael Carrillo aka "Mikey Vibe" on the creative turf of San Antonio, is a singer song writer, composer, and front man of the city's "biggest" indie rock band, Deer Vibes. For over a decade he has been involved and passionate about supporting the growth of local music in San Antonio, whether it be by taking the role of promoter, producer, music venue owner, or fan. Carrillo is a two time SXSW official artist performer, and has performed along side a handful of large names in and out Texas - his favorite being Creed Bratton (Grass Roots / The Office.) In December of 2015 Deer Vibes released "The Nature Of" Album accompanied by the Youth Orchestra of San Antonio at The Empire Theater in San Antonio, TX. From the grand sounds of Deer Vibes, to the Singer Songwriter's lyrically focused country folk project "Michael J. & The Foxes," he has continued to show his talent through various styles of writing and composing music. Carrillo has scored music for local film and podcast creators. Most recently Carrillo joined in on the City's "What Will It Take" Campaign by creating a jingle, supporting the importance of safety during the Covid 19 pandemic. He is currently working on recording for The Foxes' and planning to release multiple records by the end of 2021.