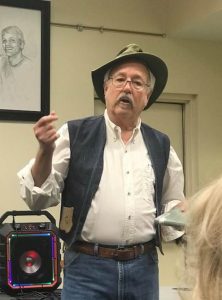 Don’s life revolves around the many poetry circles in San Antonio. His poems have been published in a hundred anthologies and periodicals and broadcasted on local TV and national radio.
His way with words has won awards and recognition from such diverse organizations as Sierra Vieja Tequila, VIA Metropolitan Transit, and the Irish Cultural Society of San Antonio. In addition to poetry, he has also written policy and procedures for industry, case histories for psychological firms, and news and reviews for various media.

This prolific writer has a regular article on the arts in Street Talk, prose and poetry in Voices de la Luna and La Voz de Esperanza, and human-interest stories in other periodicals. His work can also be found in the literary journals from Trinity University, Our Lady of the Lake University, and St. Philip’s College.
Historical essays have also been published in a variety of media. His political correspondence has prompted personal replies from George W. Bush and Barack Obama, as well as numerous state and national lawmakers.

His love of literature manifests in many ways. Don has conducted a fictional interview with with Samuel Clemens as well as a telephone interview with Hal Holbrook, the man behind “Mark Twain Tonight.” And to celebrate the 200th birthday of one of America’s foremost poets, Don scripted a one-act play and assumed the character of Walt Whitman.
Find his work in the San Antonio Report and the Good Men Project.