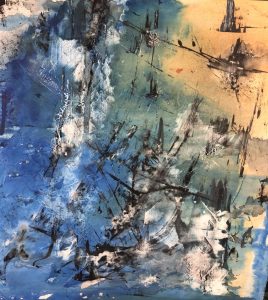 Nick Watson began dabbling with painting in the early 90’s, using mostly materials he found at his local building supply store. He returned to painting in 2012 after a 10-year hiatus and in late 2014 took it up as a full-time vocation following his final retirement from government service. He graduated from using hardware store cast-offs to working primarily on wood panels and canvas with acrylic paints, inks, and mediums, with the occasional foray into mixed media, reactive metal paints, collage, and found objects. He is heavily influenced by a love of nature and the water, having been an avid surfer for more than 30 years, and the culturally diverse experiences of many years traveling the world.

Nick and his wife, Francesca, are co-owners of The Makery in the Texas Hill Country outside San Antonio, where he maintains a working studio (aka “The Lab”) and serves as roadie, random physical labor, and the plucky comic relief at every opportunity. As a highly-decorated Army and Marine Corps veteran with 20 years of active duty service, Nick is an enthusiastic supporter of the Gary Sinese Foundation’s home building projects for disabled veterans, and donates original work to each of their home builds in the Bulverde/Spring Branch area. Whenever possible, he enjoys listening to classic rock and blues music, preferably at top volume.