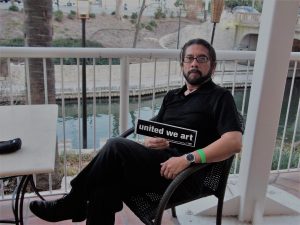 Fernando Esteban Flores is a native son of Tejas, graduate of the University of Texas at Austin with a Bachelor of Arts in English and has taught writing at various San Antonio secondary schools.

He was selected as Teacher of the Year three times (twice at SSAIS D, Dwight Middle School-1992/2002 and Robert C. Zamora Middle School-2008, SSAISD) and South San Antonio Independent School District’s Teacher of the Year for 2008.  He was also a candidate for Trinity University’s Prize for Excellency in Teaching 2008.   In addition, he received 2 ExCEL awards for excellence in teaching from KENS 5-TV.

Fernando is the founder of a group of eclectic seasoned and emerging poets, Voces Cósmicas who have been promoting poetry, art, and music at different venues throughout San Antonio since 2012.

Fernando recently received an ELLA Award (Exceptional Library Leaders and Advocates) from the San Antonio Public Library system June 2108 for his work in promoting and advocating poetry and the arts.

In 2918-19, the Department of Arts & Culture of the City of San Antonio, with support from Gemini Ink selected Fernando’s poem Song for America V (Yo Soy San Antonio) as one of 30 poem/poets to commemorate the City’s Tricentennial anniversary.

Fernando received the 2019 Arts & Letters Award from Friends of the San Antonio Public Library for outstanding contributions to the artistic community of San Antonio, TX.