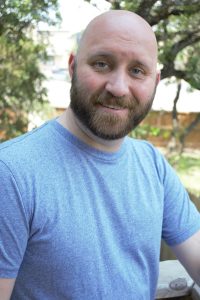 Jason Futrell is a puppeteer, puppet maker, filmmaker, musician, and jack-of-all-trades who lives and works in San Antonio, TX along with his wife, Selina.  He plays with most puppet media and uses puppetry to tell stories in film.  He dabbles in many artistic media and strives to learn more each day.