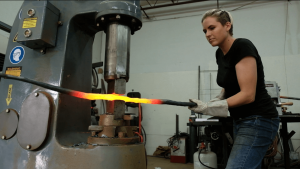 Autumn Saleh is a sculptor who lives and works in San Antonio. Saleh’s work touches on themes of contradictions, control, and freedom. The different roles she has executed in life has influenced these themes. Traveling to the middle east and working as an aircraft mechanic in the Air Force, her relationship with tools and craft came at a young age, with a father that is a welder and a mother that is a painter. Her artistic focus has become primarily about the contradictions of life as a woman between control and freedom and the phases of life that swing between the two. Sometimes in life it felt natural and other times were rigid. This important truth has been evolving throughout her life as she has many times been told opposing truths. From a strict childhood about rule following, to her art education that pushed the “out of the box” way of thinking. Much like the rigid life following orders in the military to artist colleagues pushing her to buck the system whatever that may be at the time. Through her current works she shows these themes with the rigidity of metals juxtaposed with delicate surface treatment of the final pieces with burnished gold and floated evaporating inks leaving a soft beautiful finish in the cold steel. Some of her work is weighted towards the heavy and rigid by sometimes using industrial refuse and giving destroyed objects new life. Crushed sheet steel and cracking paint she will sometimes pair with a smooth glossy copper element like a brush stroke of paint. She often meditates on the differences between the average American woman’s life and the one she is leading which is comprised of only 1.5% of the work she did in the military.