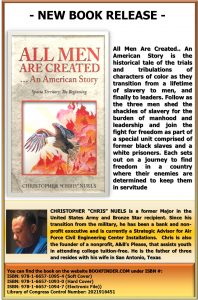 Mr. Christopher “Chris” Nuels is a 25 year former veteran of the United States Army and Bronze Star recipient. His 25-year journey of dedicated service in the military saw him rise the through ranks from Private to Major.  He was with the legendary 3RD Armored Division as an M1A1 Abrams Armor crewman in Europe that helped guard the Fulda Gap, saw the dismantling of the Berlin Wall, and helped liberate the people of Kuwait.  His career in the military saw him in challenging positions that included Artillery Fire Support Officer, Senior Human Resources Officer, Company Commander, Strength Manager for United Forces Afghanistan, and culminating as an Instructor in Military Science for the United States Military Academy at West Point.  His military awards include the Bronze Star, Meritorious Service Medal, Army Commendation Medal, Army Achievement Medal, Joint Services Medal, Afghanistan, Kuwait, and Iraq service medals.

Since his transition from the military, he has served as an Assistant Vice President for Bank of America, Regional Vice President for the Soldiers Angels Non-Profit Organization, a Senior Program Analyst for the Army Continuing Education System (ACES) at Joint Base Fort Sam Houston, and currently a Strategic Advisor for Air Force Civil Engineering Center-Installations.

He recently started a nonprofit organization, A&B’s Please!, which was created to help put low-income children in college for free, provided they adhere to a set of non-negotiable terms throughout their high school tenure. He is passionate about leadership development, values, training, and the transformation of young individuals into adults.

All Men Are Created…An American Story is primarily about the trials and tribulations of characters of color as they transitioned from a lifetime of slavery to men, and finally to leaders.

Chris seeks to use his book as a platform to promote what he calls the “American Way of Life” which is,

The American Way of life is individualistic, dynamic, and pragmatic. It affirms the supreme value and dignity of the individual and the greater good of all; it stresses incessant activity, social harmony, and lifelong mental growth on his part, for he is never to rest but is always to be striving to "get ahead"; it defines an ethic of self-reliance, merit, and character, and judges by achievement: "deeds, not creeds" are what count. The "American Way of Life" is humanitarian, neighborly, "forward-looking", and optimistic.

Chris believes “Americans” are better and stronger than the current derisive environment.