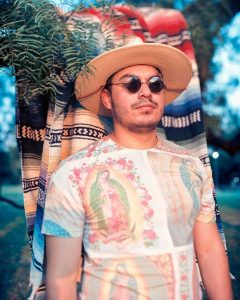 Joseph “Chelin” Juarez is a first generation, Mexican-American dancer based in San Antonio, Texas. Joseph’s dance style incorporates Popping, Waving and Yoga. In his hometown of Oxnard, CA, his dance journey began with learning hip hop dance through YouTube tutorials and music videos. He graduated with a B.A. of Performing Arts with an emphasis in Dance at Cal State Channel Islands under the guidance of Heather Castillo and Carinne Bach. During those years of training he was exposed to many forms of dance and creative concepts, inspiring him to blend new ideas with his street dance foundation. Joseph spent 5 years of his career in Los Angeles training and dancing within the contact improv community. Currently, he collaborates with a group of artists known as San Antonio Creatives to create community and content through art. He also creates dance concept videos throughout the city of San Antonio. The content of his work is influenced by his Mexican-American heritage and explores these themes through his movement.