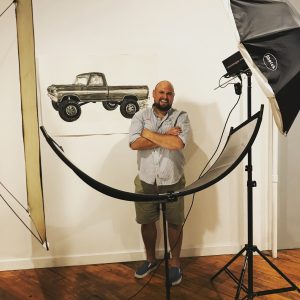 James Huizar studied art at University of Texas at Austin, before he continued his arts education at UT working towards his BFA in Studio art concentration on illustration and printmaking. Before moving to UT at Austin, he studied 2 years at Palo Alto college. James grew up south of San Antonio in Pleasanton, TX and frequented the Southside, Military Drive, Goliad.

His family lineage dates back to the establishment of San Antonio from the Alamo defender Gregorio Esparza and Adolfo Huizar of the San Jose Mission Rose window.

After completing his bachelor of fine arts in studio art, Huizar interned at Landfall press, a fine art print publishing company. Then moving back to Austin, he then began his career in museum exhibit production at the Mexic Arte Museum as their production manager for 6 years.

James moved to San Antonio from Austin, to help establish the exhibits department of the Doseum. James Huizar has been the Exhibits Technical Manager at the DoSeum for 6 years where he leads the fabrication, installation, maintenance  and project management of over 300 interactive and traveling exhibits. As a visual artist he applies his fabrication, automation, project management and diverse, skilled knowledge base to his art practice of screen printing, 3d printing, art toy design, murals and illustration.