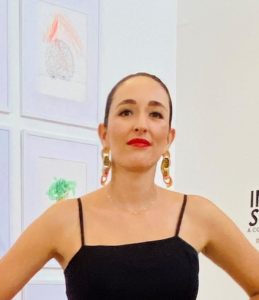 Daniela Oliver de Portillo is an artist living and working in San Antonio, Texas. Originally from Mexico City, Oliver and her family moved to the United States in 2002. She recently returned to a studio practice after a decade-long hiatus. In her work she reflects on the domestic, child rearing, and self-imposed standards of female perfection influenced by society, culture and other women.

From 2001 to 2002 Oliver worked as a studio apprentice with artist Mario Pacchioli in Florence, Italy. She then studied studio art and communications at Trinity University. She has participated in exhibitions at Universidad Anahuac in Mexico City and the Festa della Primavera in Florence, Italy. In Texas she has exhibited her work at Joan Grona Gallery, Clamp Light Artist Studios and Gallery, and Bihl Haus Arts.

In addition to her work as an artist, Oliver is a public relations and marketing consultant with a focus on non-profit cultural institutions.