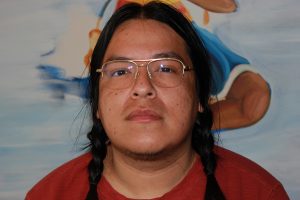 I was born in El Paso Texas in 1985. I left El Paso at the age of 9. My family is of native decent. I spent my youth in El Paso and the surrounding area. When I moved to San Antonio it was a hard transition but I would later embrace it as my home. As it was the first time in my youth that a structured and stable home life was available. I found a family as well as later created one. I left for some time but came back to the city I love wanting to be one of the many success stories that inspired me. All the while staying a practicing artist even when it was not lucrative or sustainable financially. Today, I still strive to push myself in my artistic endeavors.

Rudy Herrera creates large colorful imagery. Often murals, but sometimes large canvases. Rudy uses this medium to speak to an audience who may not gravitate to the galleries as he himself has a natural aversion to such curated paces. He speaks to those he views as his peers and contemporaries and makes them his first and most important audience. He uses spray paint and acrylic but has also resorted to use anything that will leave large marks. He speaks from a transitional generation in a brown voice. One that is just as far away from his Native culture as it is close to what may be considered American culture. With an honesty and confusion, Rudy works to push or instigate a dialogue to make him and others feel less foreign to each other.