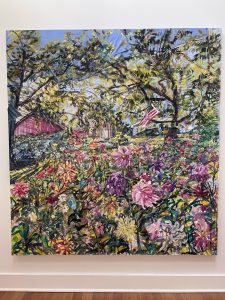 Throughout my career I have used recycled materials--from found video footage to dismantling and using every single part of a broken-down truck, including the gas. ("Pirate" Cindy, 1998). During Covid isolation I revisited a series of paintings I had begun in the mid nineties shown in New York galleries. This recent "Good Will Combine Series" is on repurposed clothing.  "Combine Painting", is a term coined in the 1950s by Robert Rauschenberg consisting of three-dimensional objects integrated into his paintings.

I was born in Alamogordo, New Mexico, received my BFA from Cornell University and was a forerunner of the Williamsburg art scene in the early eighties.  I obtained an MFA degree from the University of California, San Diego, where I studied under Eleanor Antin and Allan Kaprow. I taught at Washington University in Saint Louis, Hamilton College, The New York Studio School in New York and was a visiting artist at the Savannah College of Art and Design.  I currently split my time between maintaining a studio in Branford, CT and in San Antonio, TX.

I have exhibited nationally and have had numerous one-person exhibitions including the New Museum Of Contemporary Art in New York, and the Mykonos Biennale in Greece.  I also am a social activist and use my artistic skill in support of racial, gender, housing equality, animal rights and awareness of climate issues.  I have created many protest installations and happenings in community throughout the country.