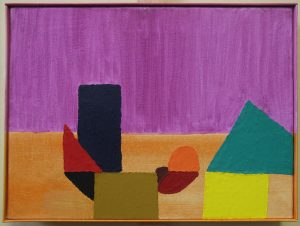 Jesse Jinna Ruiz is an artist from San Antonio, TX. Their paintings are subtle geometrical abstractions that explore shape, color and surface texture. Colors, shapes and forms are the primary subjects of Jesse’s drawings, collages, watercolors, and paintings. In recent work, paintings created in the shape of digital devices like iPhones explore the psychological space of inanimate, familiar objects. These works are composed of rich painterly surfaces and layers of opaque oils which mimic buttons and layouts of screens. Jesse explores the cell phone screen as a physical object to inquire into the visual pull of the screen or what it means to be 'glued' to a screen.

Jesse was born in Seoul, South Korea in 1988 on the 8th day of the 8th month of the year, the daughter of a US Army soldier and a Korean country woman. She grew up in a military family, living across the USA, South Korea, and Germany. Her bi-racial and queer identity have been the subject of her zines and short films.

Jesse earned a MA and MFA in 2014 & 2015 from the University of Wisconsin-Madison. She graduated from Barnard College-Columbia University in 2011 with a BA in Philosophy and attended San Antonio College for fine arts courses in 2009.