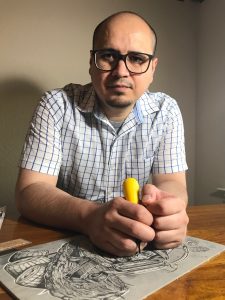 Juan de Dios Mora was born in Yahualica, Mexico. In 1998, his family immigrated to the United States. In 2009, he received a Bachelor of Fine Arts with an emphasis in Painting and a Master of Fine Arts specializing in Printmaking in 2011. He acquired both degrees from the University of Texas at San Antonio (UTSA). To this day, he is working in the art department at UTSA as an Associate Professor of Practice.

Mora concentrates in the printmaking technique of relief to create narratives of Mexican-American experiences. His experiences living along the border (US and Mexico) provide an awaking of social and political concepts that heavily influence his artistic, aesthetic and conceptual ideas.