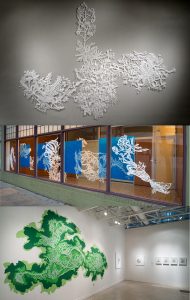 Leigh Anne Lester’s work addresses the place between the genesis of genetic modification and its aftereffects. Her drawings are layers of semi-transparent drafting film with a historical botanical drawn on each layer. The transparency of the drafting film allows the line of each botanical to optically blend with the next layer. Elements of each of the plants mix and tangle their visual attributes intermingling disparate species of flora. Lester is currently working in her studio doing drawings and hand cut drafting film that source from her previous work, seeing them as parent plants that create future generations. For the drawings, the genesis plants are put through a program that distills the imagery into multi-color cells that reference the former plant images. These floating cells are then intermingled visually with a graphite drawing of a separate distorted offspring plant with its color drained, implying a cellular, morphological struggle for resolution. The hand cut drafting film uses the same idea of sourcing from her own work, distorting through computer manipulation and then creating a new vaguely identifiable offspring, quietly installed and sprawled across it’s installation space. With this new “Frankenstein“ flora I bring into play a sense of the possible, whether good or bad. I want viewers to think of it as a 21st Century Botanical that is a premonition of the consequences of genetic modification and its effect on the future of the environment.