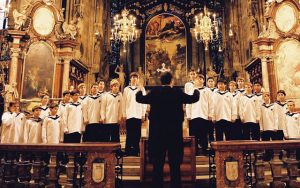 Boys have been singing at the Viennese court since the 14th century, and in 1498 – more than half a millennium ago – Holy Roman Emperor Maximilian I moved his court and his court musicians to Vienna. Historians have settled on 1498 as the foundation date of the Vienna Chapel Imperial, Hofmusikkapelle, and thus the Vienna Boys Choir. Until 1918, the choir sang exclusively for the imperial court, at mass, concerts, private functions, and on state occasions.

Today, the Vienna Boys Choir consists of 100 boys between the ages of ten and fourteen, from dozens of nations, divided into four touring groups.  Each group spends nine to eleven weeks of the school year on tour. Between them, the four choirs give 300 concerts and performances each year before almost half a million people.  They visit virtually all European countries, and are frequent guests in Asia, Australia, and the Americas.

ARTS San Antonio’s mission is to entertain, enrich and educate the people of San Antonio and South Texas by bringing exceptional and meaningful arts experiences to the people, stages, and classrooms. ARTS San Antonio continues to inspire its audiences by presenting globally significant performances for the benefit of the community.