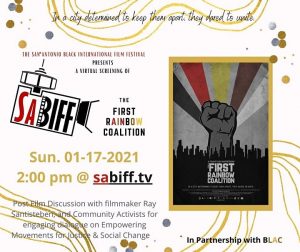 The San Antonio Black International Film Festival presents a virtual documentary screening of the award winning film The First Rainbow Coalition. We will have a post film discussion with SA Filmmaker, Ray Sanisteban, and a panel discussion with present and past activists from the Rainbow Coalition, Black Panthers, SNCC, and SA's own Reliable Revolutionaries

The First Rainbow Coalition is an award winning documentary by San Antonio filmmaker Ray Santisteban. It charts the history and legacy of a groundbreaking mulit-ethnic coalition that rocked Chicago in the 1960s. Comprised of activists from the Black Panthers, the Young Patriots (southern whites), and the Young Lords (a former Puerto Rican street gang), Chicago's Rainbow Coalition united poor blacks, whites and Latinos to openly challenge police brutality and substandard housing in one of the most segregated cities in America. What began as a drive to achieve a voice for poor communities, quickly grew into a formidable political movement, attracting the support of other disenfranchised groups and the attention of a threatened FBI and Chicago's political machine.

This film on this little known multi-ethic alliance in 1960’s Chicago film is timeless. It beckons us to learn from the past, as we are confronted with the same issues today. What can we learn from this coalition? The filmmaker, and invited guests from current and past liberation movements such as Black Lives Matter, the Black Panthers, SNCC (Student Non-Violent Coordinating Committee) and SA's own Reliable Revolutionaries, will discuss how we can bridge past initiatives with the present realities.

This program is presented by SABIFF 2021, in partnership with BLAC