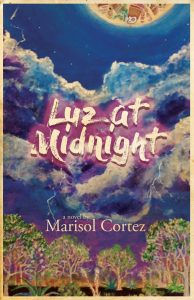 Luz at Midnight: A Book Launch and Celebration

Presented by FlowerSong Press at Online

Join FlowerSong Press in celebrating the official release of Luz at Midnight, the debut novel by San Antonio author Marisol Cortez. Luz tells a climate change story unique to South Texas—belly of the beast for boom-and-bust extraction—challenging regional histories of environmental injustice while weaving a universal story of love and longing. As Nicholas Frank writes in The San Antonio Report, Cortez's novel has proved “eerily prescient” in its depiction of the rolling blackouts that have recently rocked the state. To learn more about the book and view the trailer, visit https://mcortez.net/luz/

The release event will tell the story of Luz via selected readings by Cortez as well as conversation/readings by three guest artists who helped bring the book into the world—Mobi Warren and Kamala Platt from the Stone in the Stream/Roca en el Rio environmental writers collective, and Davíd Zamora Casas, whose painting “Question Everything” provided the novel's cover art.

Between now and the end of the release, if you purchase a copy of Luz from FlowerSong Press (flowersongpress.com/books-1/p/luzatmidnight), you'll be entered into a raffle for several prizes, with drawings held throughout the event!