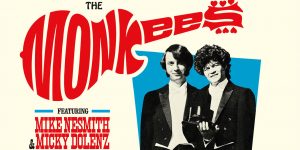 Michael Nesmith and Micky Dolenz of The Monkees launch a new tour and release their first-ever live album as a duo. Billed as “An Evening With The Monkees,” the tour will feature songs that span the band’s entire 50+ year career – from their 1966 self-titled debut to 2016’s Good Times. “An Evening With The Monkees” is the latest chapter in Monkee-mania, a saga that began in 1965 when four young men were cast in a television show about a struggling rock band that was inspired by the Beatles’ A Hard Day’s Night. Few could have predicted the impact the Monkees would have on music and pop culture at large, one that still reverberates more than 50 years later.