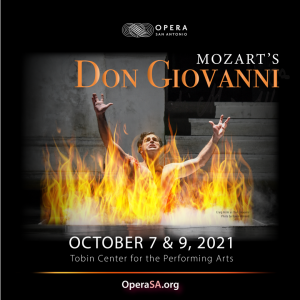 Join OPERA San Antonio on October 7 & 9 for a production of Mozart's opera, Don Giovanni. Don Giovanni (also known as Don Juan) balances comedy with tragedy as the Age of Enlightenment's most notorious womanizer meets his demise. In this narrative, Giovanni galivants his charms, tries to evade punishment for his crimes and foolishly mocks death itself, resulting in his final comeuppance - eternity in hell. Filled with breathtaking arias and quicksilver ensembles, Don Giovanni is sure to be a spectacular opening to the 2021-2022 season.