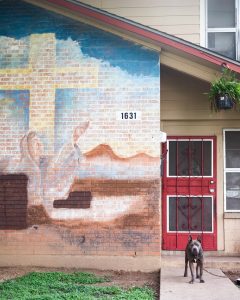 City On The Rise by Francisco H. Cortés - FOTOSEP...

Jump-Start’s contribution to FOTOSEPTIEMBRE USA 2021 is CITY ON THE RISE.

Photographer Francisco H. Cortés offers an ethnographic look at the residents of the Cassiano Homes on San Antonio’s Westside and their connection and access to art.

Recently, the majority of attention on public housing in San Antonio has focused on the planned demolition of the Alazán-Apache Courts, an acknowledged center of cultura, constructed beginning in 1939. Recognizing that, Cortés noted that the Cassiano Homes, built in 1953, now faces the same fate. While Cassiano is widely known for its many historic and vibrant murals, most residents have limited access to arts education and the benefits it provides. As a community that is often associated with a negative narrative and whose homes will be lost, their stories must be preserved. Who makes the community of Cassiano Homes?

Francisco Cortés was born on the border between the rural states of Oaxaca and Veracruz in southern México. After migrating to Texas at an early age, Francisco called the Southside of San Antonio his home before leaving to pursue Chicano Studies and photojournalism at the University of Texas at Austin. A San Antonio resident again, he is known for his photojournalistic storytelling, ranging from pensive moments, to civil unrest, to the experiences of immigrants in their alternating contexts. With film photography and darkroom printing techniques as his foundation, Cortés addresses his images with a minimalist approach, accentuating rather than manipulating truths. He instructs young people of color in photography through Detrás del Lente and The Light Catchers Society.  See www.efephotography.com for more information.