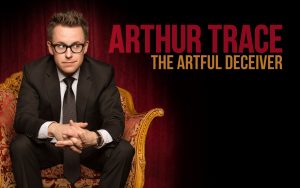 Treat your partner, or family, to a night of magic at The Magicians Agency Theatre.

Celebrated magician Arthur Trace transports you to a mysterious world where masterful sleight of hand and imaginative plots are artfully intertwined. The result is a series of wondrous surprises guaranteed to tickle the mind, senses, and funny bone.

Enjoy a night of enchantment in our magical theatre. After the show, browse our all new magic shop and take home some of the magic. Tickets will be very limited, so book now to avoid disappointment.

Due to restrictions, children under 4 years of age are not permitted in the Theatre.

Discounts for Students, seniors and Military.

Hailed by the Society of American Magicians as “one of the most creative acts in the world of magic today,” Arthur Trace is only the eighth magician in the history of magic to be awarded the International Brotherhood of Magicians Gold Medal. He also became a FISM award winner at the World Championships of Magic and was named “Best Cabaret Magic” act at The World Magic Awards. Recently, The Academy of Magical Arts nominated Arthur multiple times as Stage and Parlour Magician of The Year for his exemplary performances at the Magic Castle in Los Angeles.

Join us one hour before the show for close-up magic, free popcorn and soda, and our new "Crack the Code Challenge", a fun scavenger hunt that will take you around our historic building.