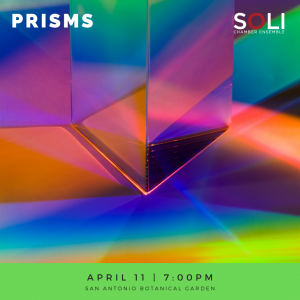 SOLI opens the concert with Ukrainian composer Bohdana Frohlyak’s “Melody” from Three Miniatures in C in support of the people of Ukraine. Jessie Montgomery and Texas native Edna Alejandra Longoria each portray a perspective on the pandemic in their respective works Peace and Caos y Resistencia, both written in 2020: struggling with quarantine, the chaos of emotions, and finding peace and inspiration in the midst of sadness and darkness. Similarly, Pulitzer Prize- and Grammy Award-winning composer George Crumb, known for his hauntingly beautiful music, set Walt Whitman’s elegiac texts in a tableau in Apparition, connecting each song in the set to a larger vision of death not as an end in and of itself, but as a circular return to a new beginning. In contrast, Dutch composer Louis Andriessen’s The Memory of Roses is a collection of special occasion pieces he wrote for family and friends; the set presented on Prisms dates from 1962 to 1983 includes a Dutch Reformed song and a demonstration song in support of street musicians. Andriessen is widely known as one of Europe’s most important postwar composers, blending traditional musical forms with the vernacular sounds of bebop, American minimalism, and jazz in energetic and often brash combinations.

Puerto-Rican American composer Armando Bayolo wrote Holbein Dances in late 2021 for SOLI Chamber Ensemble as a “Little Requiem for Louis Andriessen,” his idol and friend. The title references Hans Holbein the Younger’s treatment of death and its intransigence in his masterpiece The Dance of Death. The movements variously represent the passing of time, bones, omens, the “danse macabre,” and – in the final benediction – a meditation on the fragility of life.

Bayolo will visit San Antonio for the premiere of Holbein Dances, work with undergraduate music students at Trinity University on Thursday, April 7, present his music to students in the Music Department at the University of Texas at San Antonio on April 7 and Tuesday, April 12, and interface with the Rising Star Fellows of the Youth Orchestras of San Antonio (YOSA) on April 10.