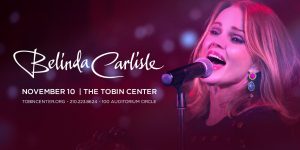 Coming to The Tobin Center

Tickets: $36.50, $46.50, $59.50, $74.50
When the most popular all-female band to emerge from the punk/new wave explosion of the late '70s and early '80s (temporarily) broke up in 1985, the Go-Go's' Belinda Carlisle quickly pursued a solo career. Still instantly recognizable by her distinctive, helium-esque soprano, it saw her transform from an energetic new wave rocker to a polished adult contemporary pop singer. The change was evident on her first album, 1986's Belinda, which featured the Top Three hit "Mad About You." She went all the way to the top of the Hot 100 with the Grammy-nominated song "Heaven Is a Place on Earth," and to number two with "I Get Weak," both from her second album, Heaven on Earth, and struck U.S. gold again with 1989's Runaway Horses. Meanwhile, a handful of Go-Go's reunions produced the 2001 album God Bless the Go-Go's and multiple tours. Eventually, Carlisle's eighth solo album, Wilder Shoes, was released in 2017. In 2021, the Go-Go's were inducted into the Rock and Roll Hall of Fame.