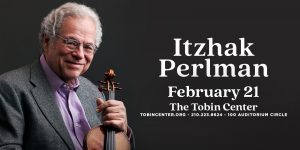 Coming to the Tobin Center

Undeniably the reigning virtuoso of the violin, Itzhak Perlman enjoys superstar status rarely afforded a classical musician. Beloved for his charm and humanity as well as his talent, he is treasured by audiences throughout the world who respond not only to his remarkable artistry, but also to the irrepressible joy of making music, which he communicates. In January 2009, Mr. Perlman was honored to take part in the Inauguration of President Barack Obama, premiering a piece written for the occasion by John Williams and performing with clarinetist Anthony McGill, pianist Gabriela Montero, and cellist Yo-Yo Ma. In December 2003 the John F. Kennedy Center for the Performing Arts granted Mr. Perlman a Kennedy Center Honor celebrating his distinguished achievements and contributions to the cultural and educational life of our nation. In May 2007, he performed at the State Dinner for Her Majesty The Queen and His Royal Highness The Duke of Edinburgh, hosted by President George W. Bush and Mrs. Bush at the White House.