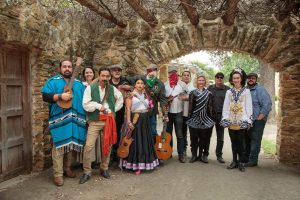 Presented by Tobin Center for the Performing Arts at https://www.tobincenter.org/

A unique theatrical concert event that shares a historical narrative through live music, dance, and storytelling of he story of the San Patricio Battalion, Irish immigrants that fought for the Mexican people against an unjust war.

Join us for a unique theatrical concert event that shares a historical narrative through live music, dance, and storytelling.
The story of the San Patricio Battalion begins in the mid-1800’s, bringing together Irish immigrants to the US and Mexican and American soldiers preparing to go to war with one another. The Irishmen, first seduced by the US Army’s promises of wealth and citizenship, were quickly disillusioned and left the US to join their fellow Catholics as part of the Mexican Army. In Mexico, the Irishmen found security in land ownership and comfort in the familiar celebration of Catholic Saints Days and lively, rhythmic music.  The Irish soldiers formed the San Patricio Battalion, fighting a gross and unjust war under the flag of Saint Patrick.
Through an original score that includes indigenous Native American, Mexican, and Irish folksongs and folk dancers representing both Mexican and Irish dance traditions, the audience will witness the allegory of similar experiences, hardships, and prejudices shared by the Irish and Mexican immigrants in the US that can still be felt today amongst their descendants.

The Tobin Center for the Performing Arts, San Antonio, TX 78205