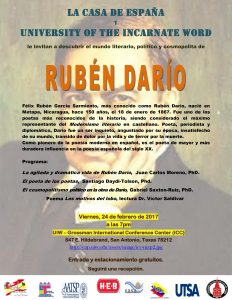 Ruben Dario, born in Nicaragua in 1867, is the icon of Spanish literary modernism. Poet, journalist and diplomat, Ruben Dario was a restless individual, worried about his epoch, distressed with the world, dissatisfied with life and petrified of death. Dario is considered the pioneer of modern Spanish poetry and the most influential poet of the 20th century.