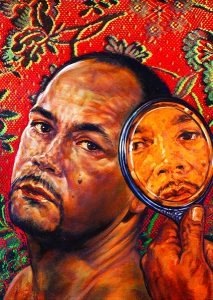 This retrospective is the largest and the widest-ranging exhibition ever devoted to Ángel Rodríguez-Díaz (b. 1955), a Puerto Rican native whose dazzling portraits engage in social commentary.

This exhibition is enriched by rediscovered paintings that had not been seen by anyone in over twenty years. They provide crucial insights into Rodríguez-Díaz’s development as an artist. Several works are publicly displayed here for the first time.