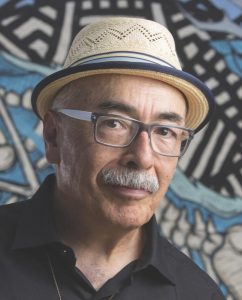 The Gemini Ink Autograph Series has historically featured free public readings and author luncheons that give the public a chance to get “up close and personal” with some of the most compelling voices in contemporary literature. This event is a special collaboration between Gemini Ink, The Guadalupe Cultural Arts Center and ARTS San Antonio.

Juan Felipe Herrera’s many collections of poetry include Notes on the Assemblage; Senegal Taxi; Half of the World in Light: New and Selected Poems, a recipient of the PEN/Beyond Margins Award and the National Book Critics Circle Award; and 187 Reasons Mexicanos Can’t Cross The Border: Undocuments 1971-2007. He is also the author of Crashboomlove: A Novel in Verse, which received the Americas Award. His books of prose for children include: SkateFate, Calling The Doves, which won the Ezra Jack Keats Award; Upside Down Boy, which was adapted into a musical for young audiences in New York City; and Cinnamon Girl: Letters Found Inside a Cereal Box. Herrera is also a performance artist and activist on behalf of migrant and indigenous communities and at-risk youth.