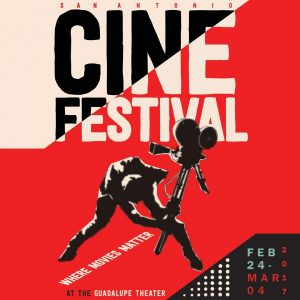 This year famed civil rights activist Dolores Huerta and film director Peter Bratt will be in attendance at the screening of the opening night film, “Dolores,” on Friday, February 24.

Also featured at this year’s festival is Ixcanul, a Guatemalan feature film about a teenaged girl longing to escape her village and go to the United States. This film, scheduled for screening on Friday, March 3, was Guatemala’s entry for the Academy Award’s Best Foreign Film consideration.

Closing this year’s CineFestival is a special world-premiere program highlighting the best of the 1990’s era Culture Clash TV show. Many of these sketches have not been seen in over 20 years. This network show was ahead of its time in prime time Latino representation and a critical, yet funny look at politics and culture. The famed Culture Clash trio will be in attendance at this Closing Night event on Saturday, March 4.