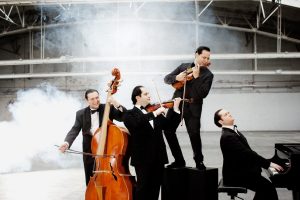 Presented by Musical Bridges Around the World at San Fernando Cathedral

Musical Bridges Around the World presents “Viennese Tort,” featuring a performance by the Janoska Ensemble. Imaginative and improvisational, the ensemble has created an unmistakably unique style. Performing together since childhood, the four young musicians are classically trained sixth-generation family members with a sound that weaves together virtuosity, an inexhaustible wealth of musical ideas and simply gorgeous music that knows no boundaries. Founded in 2013, the ensemble has quickly become a force in the music world with its profoundly personal vision that explores a vast range of works, from the classical repertoire to original compositions and completely idiosyncratic arrangements informed by jazz, pop and world music.

In March, the ensemble embarks on its first U.S. multi-city tour with stops in New York, Miami and San Antonio, among other locales. They will perform a program based on their debut album “Janoska Style,” being released in the U.S. on March 10 by Deutsche Grammophon.