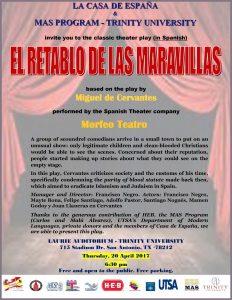 A group of scoundrel comedians arrive in a small town to put on an unusual show: only legitimate children and clean-blooded Christians would be able to see the scenes. Concerned about their reputation, people started making up stories about what they could see on the empty stage. In this play, Cervantes criticizes society and the customs of his time, specifically condemning the purity of blood statute made back then, which aimed to eradicate Islamism and Judaism in Spain.

The play will be perfromed by the theater company Morfeo Teatro, from Spain. This theater company was selected to perfrom this play at the Golden Age Classic Theater Festival in El Paso. Casa de Espana took this opportunity to have the company present it here in San Antonio as well.