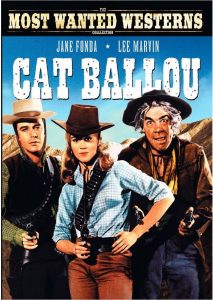 “Cat Ballou,” a musical Western spoof, tells the story of a tough schoolmarm (Jane Fonda) who becomes a gunslinger to avenge the death of her father with the help of two charming young misfits and drunken over-the-hill gun-for-hire.

The fourth annual Briscoe Museum Film Series is dedicated to Women of the West. The Western film genre has long been a man’s territory where women are relegated to the sidelines and reduced to one-dimensional characters. This summer we present four films with strong female protagonists—each complex, unique, and a far cry from a damsel in distress. Mosey on over for fun, food truck fare, and free beer! The Museum remains open late with free admission from 4-9 p.m., so make sure to check out the galleries before and after the movie.