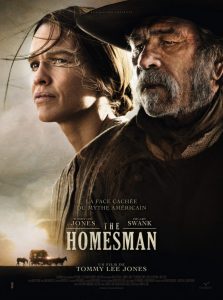 2017 Briscoe Film Series: Women Of The West – The Homesman

"The Homesman" follows three women living on the outskirts of the American frontier as they are rescued from certain death by a woman (Hilary Swank) who recruits a loathsome drifter (Tommy Lee Jones) to help her transport them to a safe haven in Iowa.

The fourth annual Briscoe Museum Film Series is dedicated to Women of the West. The Western film genre has long been a man’s territory where women are relegated to the sidelines and reduced to one-dimensional characters. This summer we present four films with strong female protagonists—each complex, unique, and a far cry from a damsel in distress. Mosey on over for fun, food truck fare, and free beer! The Museum remains open late with free admission from 4-9 p.m., so make sure to check out the galleries before and after the movie.