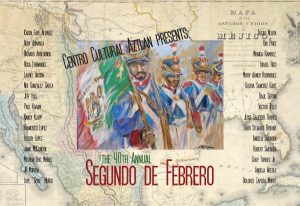 Centro Cultural Aztlan has produced and presented the annual Segundo de Febrero exhibit since 1978 in an effort to preserve Mexican American history and culture.  This exhibit commemorates the 170th anniversary of the treaty of Guadalupe Hidalgo, the ending of the U.S. Mexican war, and the redistribution of a border creating a new bicultural citizenry with a new consciousness of Mexican American dual identity, history, culture and traditions.  The inspiration for our artists comes from past and present events that result in a visual dialog of Chicano identity and a reflection of the sentiment toward border issues and current events.

The exhibit, which is free and open to the public, is on view throughout the month of February and during the scheduled hours of the On & Off Fredericksburg Road Studio Tour on February 17-18, 2018. Viewing hours are Monday-Friday, 9 a.m.-5 p.m.