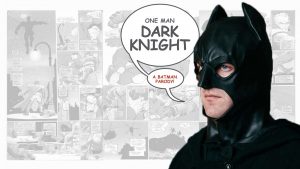 Why so serious?? From the madman behind "One Man Star Wars" and "One Man Lord of the Rings" comes an irreverent parody and homage to the Dark Knight Trilogy.

Two-faced super-nerd, Charles Ross, lovingly tears Christopher Nolan’s masterpiece a new one in his new? One Man Dark Knight: A Batman Parody. No costumes, no sets, no Batmobiles, Ross takes you on a one-hour comedic joyride, from Batman’s origins to his epic battles against Gotham’s super-villains. Hold onto your utility belt!