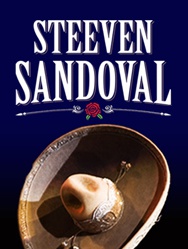 Steeven Sandoval is one of the most acclaimed mariachi vocalists of all time. He is a solo artist with an incredible voice who is known to engage audiences through powerful performances that exuberate cultural pride. He is none other than magical on stage and performs with such elegance and authenticity which transcends across the globe. Mind-blowing is really the only way to describe it!

Steeven knew from an early age, while growing up in Guadalajara, that performing was his destiny. In 1999, after many years of perfecting his art, Steeven was asked to join the internationally renowned Mariachi Vargas de Tecalitlán (el mejor mariachi del mundo). For 14 years he was featured as the PRIMERA VOZ where he gained notoriety for his heart touching performances of songs such as POR AMOR. Steeven’s lyrical interpretation has led to him gaining a loyal fan base and granted him the ability to embark on a solo career of his own.

He has performed throughout Europe and North and South America along with the Houston Grand Opera in two mariachi operas: Cruzar la Cara de la Luna and El Pasado Nunca se Termina.

Steeven will perform SERENATA PARA LAS MADRES with Mariachi Azteca de América who was awarded grand champion winners of the Houston Livestock Show and Rodeo’s Mariachi Competition TWO years in a row. There, they performed in front of a live audience of over 70,000 people. Joining this exceptional San Antonio based group on stage will be Kyle, Texas native Jizelle Rodriguez who was recently selected as the “Vocal Soloist of the Year” during the 23rd Annual Mariachi Vargas Extravaganza in December.