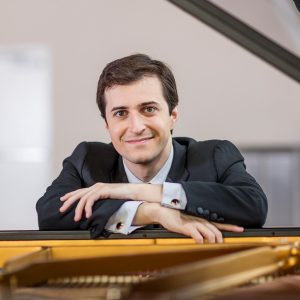 His 2017–2018 debut season as Cliburn medalist will include a recital tour in Hawaii, a return to his alma mater, the University of Houston, for its annual Texas Music Festival, and orchestra and recital engagements in Denver, New Orleans, West Palm Beach, and other cities across the United States. In Europe, Mr. Broberg appears with the Rye Arts Festival and Hastings Philharmonic in the United Kingdom, and in recital in Italy. His debut solo album was released by Decca Gold in August 2017, as part of his Competition prizes.

Also a prizewinner of the Hastings, Sydney, Seattle, and New Orleans International Piano Competitions, Mr. Broberg has previously performed as soloist with the Royal Philharmonic, Minnesota, Sydney Symphony, Seattle Symphony, Dallas Chamber, Fort Worth Symphony, and the Louisiana Philharmonic Orchestras, among others, working with conductors Ludovic Morlot, Carlos Miguel Prieto, Leonard Slatkin, Nichola Milton, and Nicholas McGegan. His solo, chamber, and concerto performances have been broadcast on NPR and ABC (Australia) radio, and several of his performances at the 2016 Sydney International Piano Competition were included on CDs released on the Universal Music Australia label.