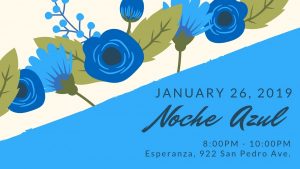 Join the Esperanza Peace & Justice Center for the monthly Noche Azul concert. Come celebrate the start of the new year with Azul!

Azul Barrientos, a popular San Antonio musician and performer, was born in Mexico City, Mexico. Professionally trained, and inspired by her parents and singers of old, she has been the artist-in-residence at the Esperanza Center since 2007. Throughout her life she has used her music as a way to make political statements and give voice to various social justice issues. From singing about women in the Mexican Revolution, to sharing the story of the 43 student teachers from Ayotzinapa who went missing in 2014 in Mexico, Azul’s style and message vary with every Noche Azul concert.

Seating is first-come first-served. Concessions will be available. Stairs and elevator available for use to get to 2nd floor where concert takes place. You may bring your own seat cushions if you’d like, but no personal chairs.

$7 at the door. Donations are appreciated.

Tickets are ONLY sold during the day of the concert starting at 6:30 p.m.

There will be a 15 minute intermission.