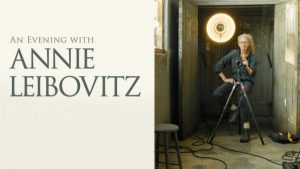 An Evening with Annie Leibovitz

Annie Leibovitz is one of the most influential photographers of our time. In an exclusive San Antonio event to mark the publication of a revised and expanded edition of "Annie Leibovitz at Work" (Phaidon), she will present and discuss a selection of her pictures.

Originally published in 2008, "Annie Leibovitz at Work" was written with young photographers in mind, but it provides an illuminating view of Leibovitz’s photographic practice for a broad audience. There are stories behind some of her best-known images—Richard Nixon’s resignation, the Rolling Stones on tour, Queen Elizabeth II—as well as discussions of lighting, cameras, studios, photojournalism, working with writers, and the ten things she is always asked.

Annie Leibovitz’s astute observations of American life have had a prominent place in the cultural landscape for nearly five decades. She has received many honors, including the International Center of Photography’s Lifetime Achievement Award, the Centenary Medal of the Royal Photographic Society, the Wexner Prize, and the Prince of Asturias Award for Communication and Humanities. She is a Commandeur in the Ordre des Arts et des Lettres and has been designated a Living Legend by the Library of Congress.