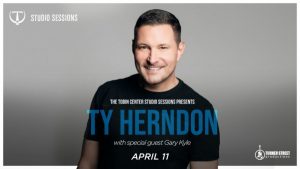 Ty Herndon’s number one singles include “What Mattered Most,” “Living In A Moment” and “It Must Be Love,” plus he hit the Top Ten with “I Want My Goodbye Back,” “Loved Too Much,” “A Man Holding On (To A Woman Letting Go)” and “Hands Of A Working Man.” With 17 Billboard chart hits and two gold albums to his credit selling over four 4 million units, Ty Herndon also performed at OPRYLAND in the cast of “Today’s Country Roads.” He also became a finalist in the iconic television series “Star Search” winning in the male vocalist category. Ty’s album ‘Journey On’ earned a Grammy nod and his first Dove award.