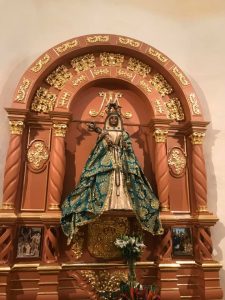 The story goes back to the founding days of San Antonio when a statue of the Virgen de Candelaria, the patron saint of the Canary Islands, was carried by the original settlers in 1731 as they trekked by foot from Veracruz to what is now San Antonio. A replica of the statue of the Virgen was gifted to San Fernando by the former President of the Canary Islands, Spain, Manuel Hermoso.