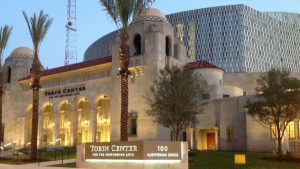 A versatile, world-class performing arts facility for the nation’s seventh-largest city. A center where our school children can receive specialized education opportunities and exposure to extraordinary performances. A new magnet for downtown revitalization, located on the River Walk leading up to the new Museum Reach. And finally, a much-needed home where our resident performing arts groups can grow and thrive.

Situated along the banks of the River in the city’s heart, the historic Municipal Auditorium, with its original facade preserved, is being transformed into a world-class venue. This theatrical icon will once again become the pride of the River and a shining beacon of creativity, fine art and downtown development. There will be no better place — anywhere — to see and hear a live performance.

When the dust finally settles in September 2014, The Tobin Center will feature a state-of-the-art, multi-purpose 1,759-seat (2,100-seat with flat-floor configuration) performance hall, a 250-seat studio theater, and an outdoor performance plaza connected to the River Walk with a permanent 30 FT video wall and water taxi portal.

The remarkable flexibility of the 1,759-seat H-E-B Performance Hall, with its distinctive “flat-floor” capability, opens the door for performances and events of almost any sort. The acoustics in the Hall can be “tuned” to fit the performance and the physical set-up of the hall, and the sound insulation throughout The Tobin Center will also enable simultaneous use of the Performance Hall, the 250-seat Studio Theater and the 600-seat River Walk Plaza.

The Bexar County Performing Arts Center Foundation – formed to own and operate the new facility – committed to raise $54 million from the private sector. The Tobin Endowment made a $15 million challenge grant, and that challenge has been met, with well over $39 million in private funds already committed.

Beginning with the grand opening festival, audiences will see and hear performers and performances of every description.