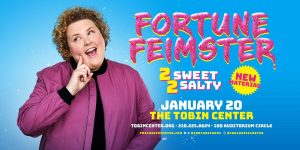 You can catch stand-up comedian, writer, and actor, Fortune Feimster, on the radio, on screens both big and small, and touring her stand-up across the nation.

Fortune Feimster first became known nationally as a writer and panelist on E's hit show CHELSEA LATELY before starring as a series regular on Hulu’s THE MINDY PROJECT and NBC’s CHAMPIONS. She has gone on to have many guest appearances and recurring roles on TV shows including RU PAUL’S DRAG RACE, DEAR WHITE PEOPLE, DRUNK HISTORY, CLAWS, 2 BROKE GIRLS, WORKAHOLICS, GLEE, IDIOTSITTER, TALES OF THE CITY, THE L WORD: GENERATION Q, LIFE IN PIECES and @MIDNIGHT.