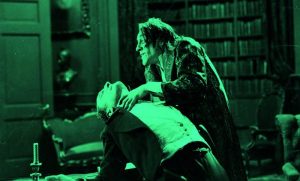 Presented by The URBAN-15 Group at URBAN-15 Studios

Austin’s Emperors of Eclecticism, the Invincible Czars have been all over the U.S. in the last year with their silent film soundtrack to Nosferatu.  They kicked it all off at URBAN-15 last spring and now they’re coming back with a new silent film score for Dr. Jekyll & Mr. Hyde.

Released in 1920, and considered by many as the first significant American horror film, the movie stars Drew Barrymore’s grandfather John Barrymore as both Jekyll and Hyde in one of the most memorable performances of early film. Based on Robert Louis Stevenson’s 19th century gothic novel, the movie tells the by-now-classic story of Dr. Henry Jekyll , a scientist, philanthropist and all around upstanding English citizen.  When a colleague invites the uptight doctor to a cabaret show, Dr. Jekyll’s attraction sends him on a Victorian quest to separate humanity’s good and evil aspects.  Using himself as the test subject, Jekyll unleashes his own evil alter-ego in the form of Edward Hyde.  But Jekyll’s imperfect science sends the good doctor into an uncontrollable oscillation between these two selves that imperil his reputation, his finance and eventually his own life.

The Invincible Czars’ soundtrack is minimal, spooky and even includes audience participation!  Line-up features Leila Henley (winds, vocals, loops, percussion), Josh Robins (guitar, sound effects, percussion), Phil Davidson (violin, organ) and Hen3ry Q Vines (bass guitar).  The band has incorporated music from the classical realm into the score, arranging Eric Satie’s Gnossienne No. 1 and No. 5 alongside an eerily beautiful but obscure Debussy piece entitled Footsteps in the Snow. Just like their music, The Invincible Czars’ wardrobe is meant to complement the film, and they encourage audiences to do the same!

This event is part of URBAN-15’s Sonic Provocation series, an experimental project whose aim is to provide a setting for sound artists to showcase original material, taking it out of the laboratory and into the ears of the public. Sonic Provocation offers artists the creative freedom to present their work beyond the constraints of audience expectation—and in turn offers audiences the opportunity to experience something acoustically different and unique.